As the US braces for tornadoes and downpours of torrential rain over the holiday period, we decided to take a glimpse at the last ten years of twister activity on the US territory.

The interactive map shows twisters that swept through the country between January 2002 and December 2012, often devastating entire regions.

Adverse weather conditions that hit the US on Saturday are there to stay, with heavy rainfall and floods possible in Arkansas, Louisiana and Texas, as well as the lower Great Lakes.

The stormy weather sets in at a time when many Americans hit the road for Christmas holidays. AAA estimates that 94.5 million will travel the minimum of 50 miles from home between this weekend and the New Year’s Day. Some 85.8 million (or 90% of travellers) will go by car, while another 5.5 million will pick a flight over drive.

Although twisters tend to occur more often in spring and summer, many come into being towards the end of the year, as in 2012 when as many as 75 were recorded only in December. A tornado outbreak on Christmas Day that year passed through central Alabama to northeastern Texas.

The first half of 2013 was an exceptionally calm period for twisters, and the year as a whole – one of the calmest on record. In August, the average preliminary count of tornadoes was almost half the average (716 as opposed to 1221), thus slipping below the historical minimum and setting the new 60-year low.

Even though the dangerous storms were infrequent this year, they killed 52 people as of November. The deadliest tornadoes were recorded in May and November. 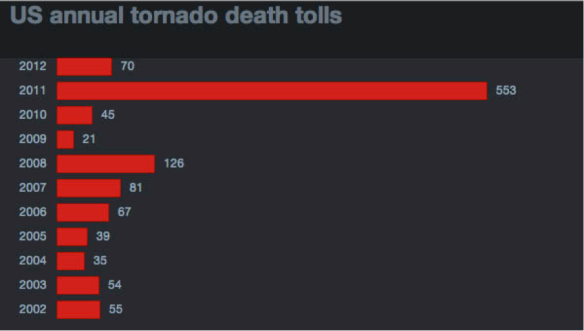 Motorists are encouraged to check the weather at their destination and along the route before setting off. They are also advised to make sure their cars are well-prepared for the trip; special attention should be paid to the tread, air pressure on the tires and the windshield washer fluid that won’t freeze.