All the pretty things you see when browsing through data-driven news reports or visualisations are not that difficult to produce. In fact, they are two clicks away*. Mind the asterisk, though:

*IF AND ONLY IF you have a nice set of cleaned-up data easily readable by your software, like Tableau Public.

This was indeed the case during our class last week. Easy.

But while working on my first ever visualisation from the comfort of my room, I couldn’t escape the feeling that my time has been sneakily stolen. Not by tweaking colours, tooltips, filters and maps (the fun part), but by struggling to get something out of the numbers in Excel. I had to give up on a couple of more exciting ideas in favour of this breakdown of population in the largest city (% of urban population) as delivered by the World Bank. Here’s the result: 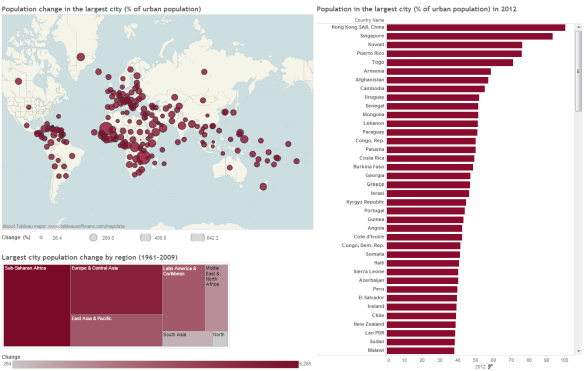 Population in largest city is the percentage of a country’s urban population living in that country’s largest metropolitan area.

After calculating the percentage change in the population dwelling in the largest city in every country between 1961 and 2009 (numbers for all countries were only available until that year), I created a symbol map which shows which largest cities grew most.

Excel’s vlookup function proved extremely useful to match countries and regions in order to show  the growth regionally on a treemap, with Sub-Saharan African cities attracting population the quickest over that period of time and North American ones noting the slightest growth.

As an addition, I decided to include a bar graph showcasing the greatest magnet-cities of 2012.

The initial plan was to also include a map with a timeline presenting the city’s population change over years, but I still lack the skill to do it.

All in all, this first attempt at visualisation was great practice and allowed me to get more insight into the workings of Tableau. I’m looking forward to producing some more interesting pieces of work.